Prague is often called “The city of a hundred spires” and actually, this is very underestimated. Hundreds of spires are to be found in Prague along with other great pieces of architecture, ranging from Roman style to Postmodernism. Come to Prague and discover one of the world’s most charming cities!

Consider a climb up to the Prague Castle (or take a tram) and enjoy a wonderful sight of Prague’s downtown. Descending along Nerudova street will give you many chances to have a rest in a café or restaurant before you head onto the Charles Bridge. After crossing the Vltava river, you will find yourself in a close proximity to the Old Town Square, with world famous Astronomical clock (Orloj in Czech) and the Tyn Church.

In case you are ready for more, Jewish Town is not far away. 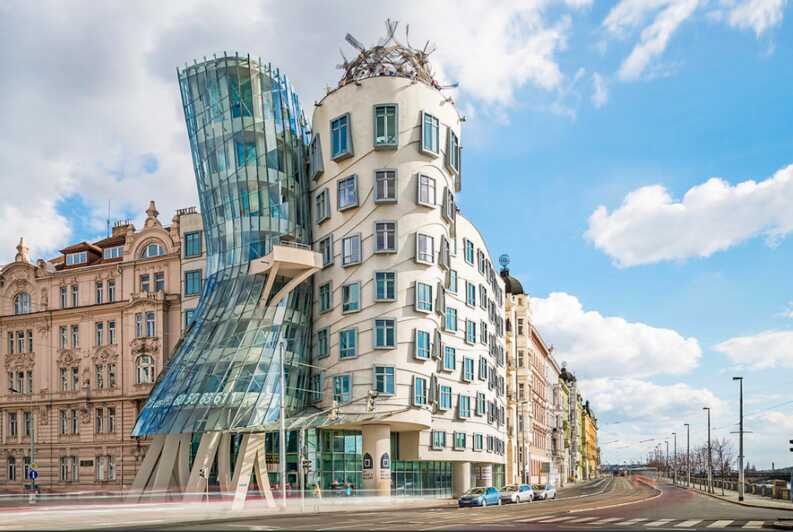 Within walking distance from Charles Square, this plot of riverfront property had remained vacant for many years following the bombing of Prague in 1945. In 1992 construction of this controversial building began, co-designed by Croatian-born Czech Vlado Milunc and American Frank Gehry. At the time of its construction, there were some who were opposed to erecting such a modern building in the historical Nove Mesto district, but by its completion in 1996 it had become an accepted addition to Prague’s famous Neo-Baroque, Neo-Gothic, and Art Nouveau architecture. Although some people (including former president Vaclav Havel) had hoped the building would be used as a kind of cultural center, today the Dancing House is merely another office building, home to several multinational firms, and is not open to the public.

The only part of the building open to the public is on the top floor, where one of Prague’s finest restaurants, La Perle de Prague, is situated. La Perle serves mainly French cuisine and making reservations ahead of time is recommended. The restaurant is more expensive than most restaurants in Prague, with drinks costing nearly three times the average price. However, the breathtaking view of the Vltava from one of Prague’s most unique restaurant is completely gratis.

Compared to the night life in Europe’s other major cities, the club scene in Prague can feel a bit outdated. Even at Karlovy Lazne- the club whose six stories make it the biggest club in Europe- you’ll hear songs like “Ice Ice Baby” mixed in with the DJ’s Top 40 set. And though the music may be cheesey, the staff is friendly and most of them speak English, and with six dance floors you’re bound to find something to suit your taste. However, you’ll soon find that the majority of the club’s patrons are other tourists and expatriates. Club Misch Masch offers a similar scene, providing strong drinks and throngs of Czech women ready to party. Weekend nights are usually quite crowded, so be sure not to lose your mates on any of the three dance floors- chances are, you won’t find them again!

If big clubs with brain-tickling flashing lights aren’t your thing, you can still have a fun-packed night at clubs like Chateau Rouge and Cross Club. Chateau Rouge provides one floor which carries the sort of chilled-out vibe you’d find at any pub, and a basement area with a dance floor and hip music. It stays open late enough for you to catch the morning metro home, the drinks are reasonably priced, and there is no cover charge. Cross Club has a similar dichotomy of environments, one with tables where Czechs and tourists alike gather to chat and smoke, and another with a large dance floor. The music varies from night to night because Cross Club books a lot of guest DJs who offer a buffet of beats to their enthusiastic fans.

At places like Roxy and Lucerna Music Bar, it is recommended that you check out the evening’s lineup before going, because these are popular venues for live bands as well as for typical nightlife scenes. Thus, the crowd, music, and cover charges vary accordingly. Most of the best live acts passing through Prague play at one of these clubs or at Akropolis (with the obvious exception of the big acts which play at larger venues like the T-Mobile Arena). The nightlife scene in Prague may not have the same variety or cutting-edge trends as other major cities, but you won’t be disappointed with your evenings out in the Golden City. Especially at weekends and during the summer months, Czechs party- literally- till the break of dawn, and often for a few hours after the sun comes up. If 6 a.m. rolls around and you’re still not ready to “call it a night,” the after-party is just getting started at places like Le Clan and Studio 54. Just make sure you get enough sleep to do it all over again the next night!